Konstantinos and I had the pleasure of seeing a lot of cities made by some of you, even getting to watch some processes directly on video. It's always great for us to see what stories and cities emerge. And it is really helpful for us in understanding how the game is played.

That said, I noticed that the rules around faction and power seem a bit confusing. People use them differently than we intended. So I put some time into thinking about how to improve that part of the game. And I'd love it if you'd find some time to playtest them and let me know what you think before they get put into the game proper.

During our internal playtests it seemed really important to give an indication for the relative strength of the factions. Even though the power of a faction has no actual impact on the city's development it still feels meaningful to track. So I came up with the idea of using citizen tokens to represent power. Something that felt elegant and that I was really enamored with.

The idea was that you take the tokens out of the pool as they enter the city.  Then the total citizen tokens represent the vague number of people. As factions gain power the tokens are moved off the districts and onto the factions. This represents the number of "supporters" that faction has. What I loved about it was the simplicity of only needing one token.

However it is a bit abstract. It's very intuitive (and fun!) to put citizen tokens into districts. That makes sense. These things represent people, and they move into the city. So that's clear. That works. But moving those "off the map" suddenly turns the token from a physical movement of the citizens to the abstract concept of their support shifting. And that's where people misinterpret the rules.

This double use might be conceptually elegant, but practically unintuitive. So yeah, that's not going to work.

After finishing the dungeon-builder Ex Umbra, which has two different kinds of tokens (Threat and Reward), I ended up a lot less focused on the idea of a single kind of token. That opened up room for some new solutions for Ex Novo too.

So here's my proposed set of rules for faction power:

EDIT: These rules have been updated!

This is the basic set of rules that you could already playtest with. If you do, please share your feedback!

However, right now the goal is to make the rules around power easier to understand. So before we make things more complicated we need to find out if this set of rules actually works the way it should. And that's where you come in! If you're up for it, run a session with these rule changes and let us know how it goes! Any kind of feedback is appreciated!

The best way to get in touch is to join the discord for our game Nowhere Prophet, which now has a brand new Ex Novo / Ex Umbra corner!

A playable city-generator and map-making game.

Gave it a test on a little village and I like the difference! The main thing I like about it is that power can blob and shift freely no matter the size of the settlement. Previously, I felt like with small villages, I was just constantly shifting one or two population tokens between factions.

A few things I was unclear on while playtesting the new power rules:

1. Is there an intended maximum power pool like there is with the population pool, or do we simply produce tokens from a nebulous pool as instructed? Are we to instead relocate tokens from the city to a faction?

2. We place the initial two tokens on our first resource. Does this mean the initial faction card placement takes one of these, or do we add a new one from the pool? My brain wants to interpret the tokens on resources as "Control of this resource is worth X power to the faction who controls it."

3. If so, what happens when there's only one token left on the resource but another faction gains power? Do they take it from a different faction, take a new token from pool, or just not gain power in order to leave at least 1 token in the city?

5. Is there an intended interpretation for the majority of power tokens being in the city? Does this imply that this amount of power is spread among the citizens? That the factions fight over it and that power is constantly in flux? Is it assumed that the faction with the majority of power controls all the rest of the power not allocated to another faction? Specifically, what do tokens left on resources symbolize?

I have a feeling 5 is supposed to be up to individual player interpretation, but I figured I'd ask just in case. (The rules lawyer in me must know...!)

Presuming a great deal, I came up with this. Perhaps the placement of the power tokens (the purple ones) will help you spot any unintended interpretations I made of the rules? 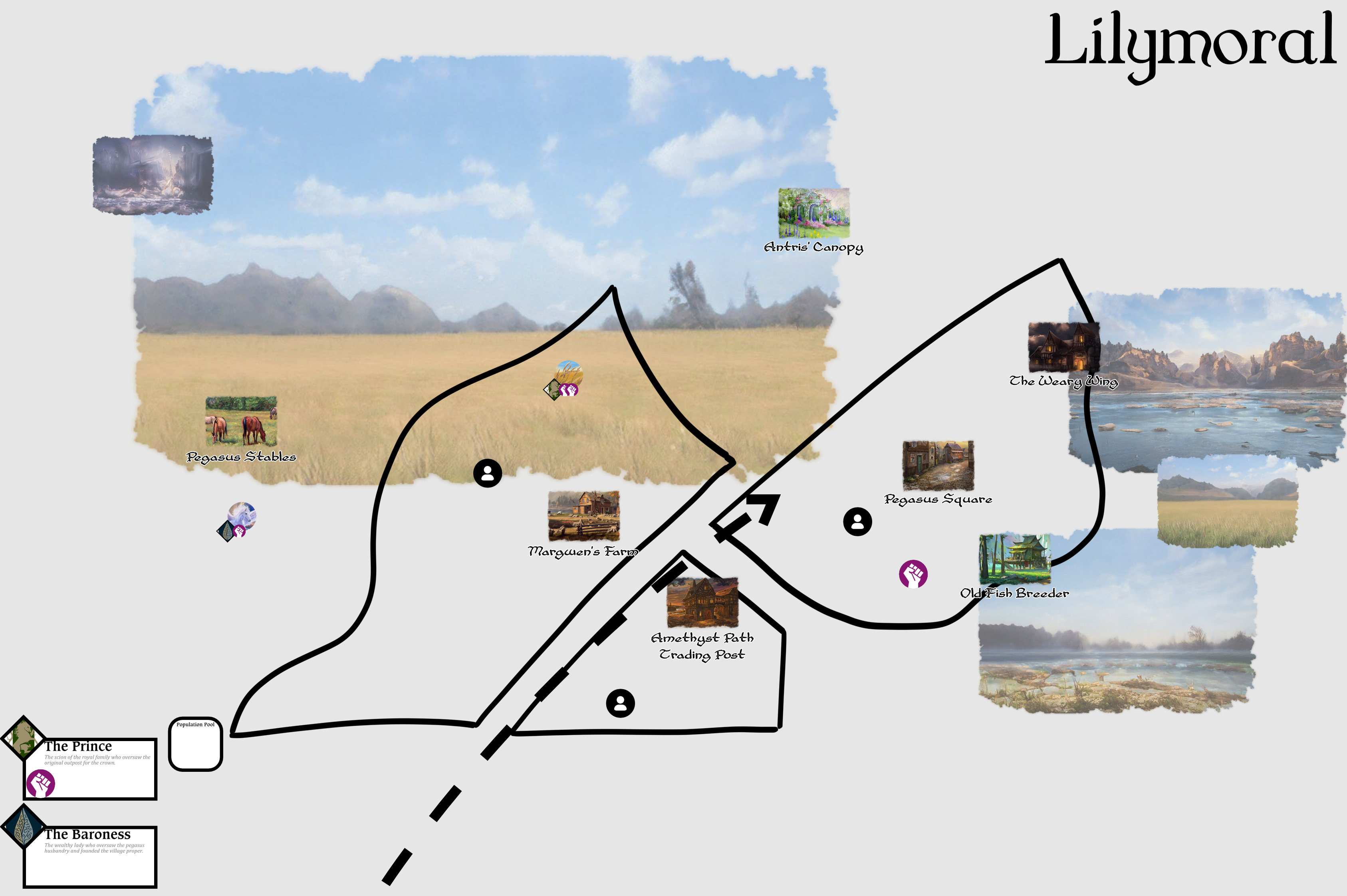 She's an elven pegasus ranch originally set up as an outpost meant to breed steeds for a war effort further off. Came out kinda peculiar for an elven settlement, but the important part is the way power tokens ended up getting placed. :)

Thanks for the test and the detailed writeup! I'll try to reply to your points below. Also sorry for the long delay in getting back to you. The best route for quick feedback is the Discord (http://www.discordgg/nowhereprophet)

No. Whenever a resource is added, more power-tokens a put into the city. And vice versa.

The idea is that the city starts with a resource and two power tokens. Then one of these tokens is moved to the leading faction as they are in control of that resource.

Well, when a faction gains power they can take ANY NUMBER of tokens from ANY SOURCE. So you could take one power token from the remaining resource. Or one from another  faction. Or both. A small sidenote that tokens that are not on the map (but on a faction instead) are still considered to be "in the city".

Tokens on resources symbolize power potential that is present in the city but not leveraged by anyone. It is meant to be vague on purpose to allow for a wide variety of interpretations that suit your story.

Feedback on your map

I love the impression pictures you put on there. I think that's a great way of making even a simple map seem a lot more alive!

Also it seems like you only had the initial power token on the faction from the step during founding. And I'm a bit confused about the one token free-floating in the district there.

The idea is that:

I've started putting the new power rules into the rule document. If you're interested, join the discord: http://discord.gg/nowhereprophet

Excellent to see this wonderful tool is still developing. (Used it for a Pathfinder 2E run just recently to excellent effect!) Also really interesting to hear about Ex Umbra, which I may look into soon... If I get around to playtesting these rules, I'll provide feedback, but in theory, I like what I'm seeing. I'll remember this when our table moves up to the next big hub town.

Thanks for all the hard work, guys. You have no idea how much Ex Novo has helped my creative workflow.

Happy to hear you're having fun with the game. Let me know how Ex Umbra works out for you!

I really like the game, but the times I've played it I've ended up double-checking on the rules regarding citizen tokens. Usually what confuses me is the initial factions not having enough citizen tokens in the city (I don't add more citizen tokens at the start of the game, before the development phases start), and not knowing whether citizen tokens can be moved to factions even when no "a faction increases/decreases its power" result is rolled.
However, if these new rules link faction power only with power tokens, what would be the purpose of the citizen tokens? I may be missing something, but it'd seem like they would represent district density, which is already present in the game.
Anyway, I really enjoy the game, and the good thing is that it allows you to modify the rules to fit the narrative you build with it. Thanks for creating such a fun game

Well the idea as currently in the PDF is that the city always starts with 1 district, thus 1 citizen token and that is moved to the one faction that is actually in power. Factions can have 0 tokens and still be valid and existing.

The purpose of the citizen tokens is, among other things, to track the size of the city and make sure the desired size is reached. If they no longer double for power that would then removed he need for the cumbersome "repeat district outlines to mark density" rule and the tokens would be placed on the map to show districts and district densities: aka where people live.

So basically, if these rules keep, we wouldn't see two and three-line districts anymore? I could work with that. My line-drawing is sloppy and terrible.

Yeah, you'd only increase density by putting tokens in, not by adding lines.

When my group did city gen we gave each population a faction colour instead of putting the pop on the faction card, so inquisition might be red, merchants might be yellow, and the dwarven smiths brown.  If a faction was destroyed the population could move to another faction or neutral white colour.

We actually discussed a version like that but I didn't like that it required you to have a lot of different tokens and to frequently swap tokens around if people switch allegiances.