I've been busy working on this update for a while. Some of you might have played around with it in the PREVIEW branch but I finally have all the artwork here and in place so it's time to roll this out to everyone!

This is the big one! Over 40 new units have been added to the game. Four for each faction (1 common, 2 rares, 1 legendary) plus two unique spawnables....

And just in time for halloween, some of these boys, girls, beasts and drones are of the creepy and spooky variety! Check out the thornhide skulker, a massive spider-like creature sporting a carapace reinforced with razor sharp quills. Or the wretched sadhu, a cultist that prowls burial grounds and wears the ashes of the cremated as decoration. And then there's the pious feeder. The devoted caretaker of his horrific master, the accumulator drone! This tentacled monstrosity consumes biomass of the living and the dead to steadily grow in strength, size and ferocity.

The goal was to add a set of units that enable and improve a number of different deck builds and playstyles. Give them a whirl and see what you can come up with!

Brawl says: If this unit enters battle in a position from which it can attack, then it will fight the first target in the opposing row.

This is a pretty useful keyword, especially if you're behind in terms of board control. It's not quite as powerful as Charge, that lets you decide who to attack. And Brawl doesn't allow you to attack the leader, but it is very useful to set up some quick trades or get in that extra blow to break the enemies hold on the battlefield.

If you check out the new units you will see that it is very present with the Hilltribes, the Beasts and the Cultists. 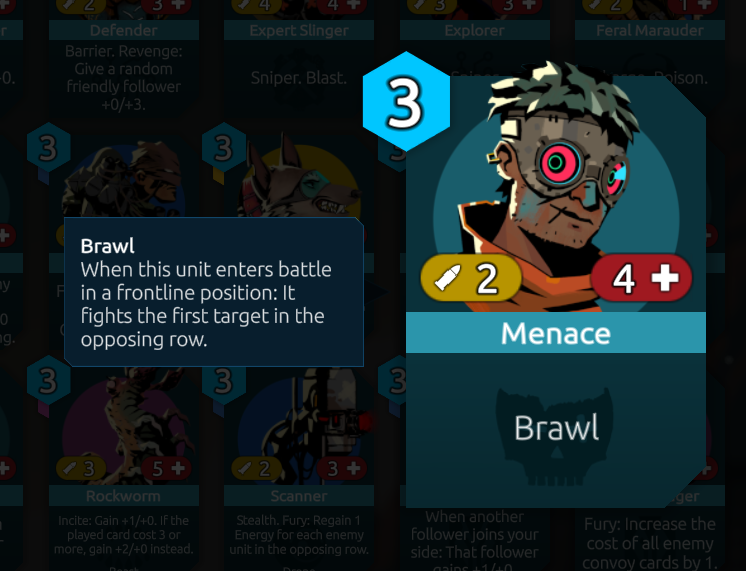 Our second new keyword is Stoic. It reads: If a unit with stoic is destroyed it suffers no wound.

This is great to create some more resilient units, make more judicious use of Revenge effect and to mitigate some of that damage you take in slower strategies and builds.

Note that no unit has unconditional Stoic in all cases, but there are a few units that gain (or lose) Stoic under certain conditions. And there's a few ways to bestow Stoic upon units otherwise.

Stoic can be found primarily on Union soldiers, lepers, Shiram crusaders and drones. 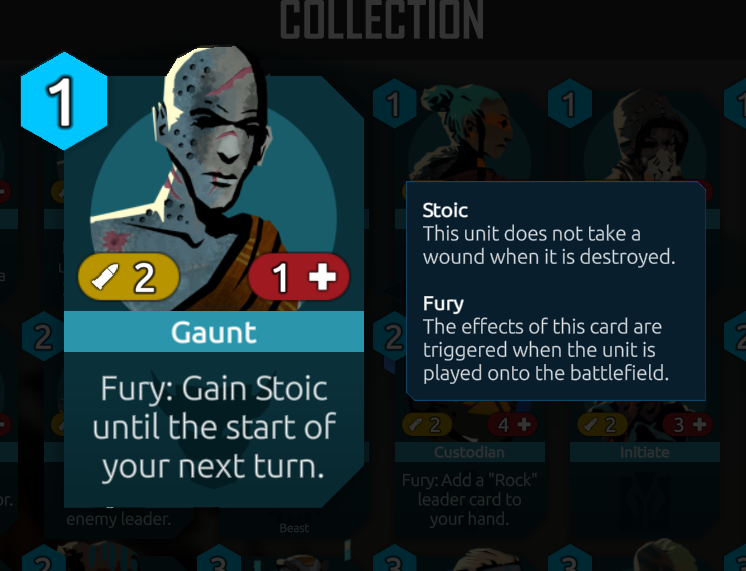 Another big new feature is the ability to discover and salvage the remains of your previous run. If you played a campaign game and died, then some of your followers and items can be recovered on your next campaign run.

More will remain based on how far you made it and what you were using in your deck when you met you grisly end.

Can you make it to the quest node and recover some of what you lost?

A number of elements of the game were improved and rebalanced. Chiefly among them the enemy decks:

On lower levels enemy decks are less synergistic and they increase in strength more evenly as their level increases. Also some new cards have been added to the game and to the leaders to provide interesting threats that the player can play around. Watch out for traps, mines, automated weaponry and the occasional well-aimed boulder! 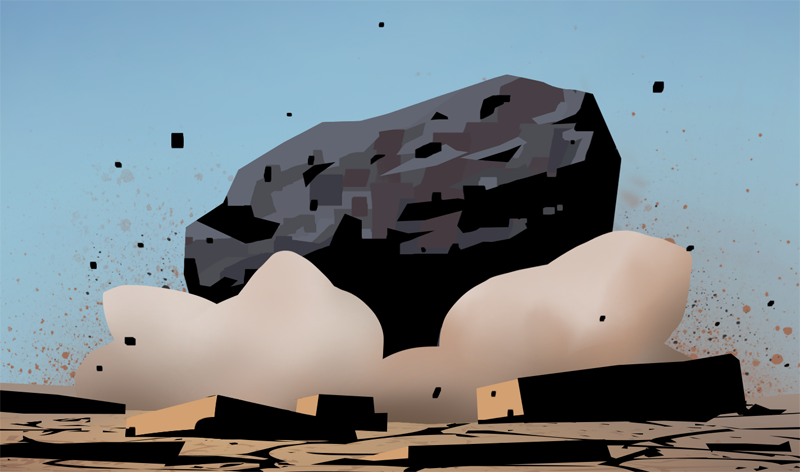 Besides enemies the cost of travel was also tweaked. General costs have been increased a tad across the board, while hope gain from luxury items has been reduced a tad. To make up for that reaching a milestone now grants a sizeable hope boost.

This makes for more focused and interesting decisions when it comes to travel without making travel to the next milestone harder. Together with that the chance for fights on the road has been dramatically reduced. Both these factors also help keep the length of sessions a bit more focused.

And lastly the chances for enemy surrenders were tweaked to make it a lot more manageable to force enemies into surrender if you can control the battlefield. This should make getting some of these unlocks a lot easier.

Of course there's also a lot of smaller changes to cards and effects. See the changelog for the full list but here's some of the more interesting tweaks:

The maximum size of the convoy deck was reduced to 24 cards (from 30). This change was made because 30 cards is usually an inefficient deck. Most fights can be won with a 10-15 card deck, only on long matches against bosses will you need more. To help players build a tad more effective and consistent decks the maximum was reduced. If you continue a game where you exceed this new maximum, then you will only be able to remove cards until you are below the new maximum.

The essential charge units (Cultist and Janwar Bear) were both tweaked down a tad by having their Strength reduced by 1 (to 2/2 and 4/2 respectively). This gets them a bit more in line with the other units while still keeping them strong and useful.

And that's it for this update! If you have any thoughts and feedback on the changes, please join the Nowhere Prophet Discord and let me know!

And now: Have fun!