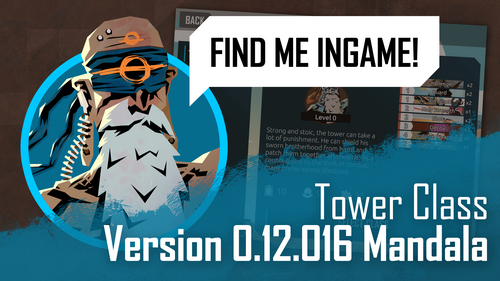 New year, new update. I initially wanted to release this one before Christmas, but as mentioned in the roadmap: Things got a little chaotic and it just did not pan out. But now, for v0.12.016 MANDALA we finally have the first unlockable class! As usual: If you're using the itch.io app the game will auto-update, otherwise you'll simply have to re-download!

The TOWER joins the fold. This operator is a robust and stoic warrior. Adept at protecting and patching you up. This class interacts a lot with heal, taunt and armor effects. See if you can find out how to unlock the guy but here's a small hint: Follow the stories of the Grim Ribbon.

So, what's next? Next up is extending the game by another map, which means you'll be able to visit the Ziggurat and see what lies beyond. As part of that I want to touch up some of the existing milestone events. And with that also bring in another unlockable convoy: The Faithful. And, if there's some time remaining then I finally want to add a proper help view, since my original screen-context help plan did not work out. So if everything goes according to plan I'll be able to release that update within this month.

Anyway, here's the changelog for this patch: