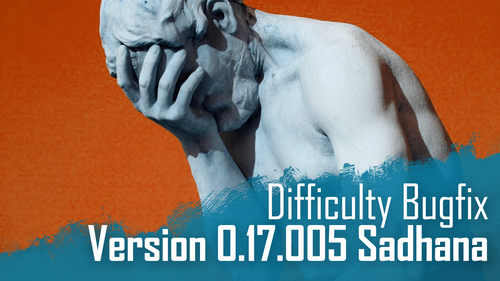 Ooof... So... I've got a confession to make. But before I get into that: I've just uploaded a bugfix update patch. As usual you can find a list of all changes below.

So my confession is about a teeny, weeny bug that has been in the game for months now. It has just now come to my attention through the Restart Game function (thanks to Inkie from the Discord). The bug made your Difficulty selection completely meaningless as the game would always start on Normal. And all of that because of one line of code:

I feel terrible about that and I'm really sorry to anyone that struggled with the difficulty. I guess I'll have to turn in my game developer card now.

Especially since I know a few people have complained about the game being too Hard, even on Easy, and I couldn't understand why. Well, now I can. The issue slipped by me because in my internal tests I don't go through the main menu but start the game directly with a difficulty I select, which always worked.

In any case: Now the issue is fixed and difficulty is now properly re-enabled, but this means that all my balancing based on player feedback during the last weeks and months was basically for naught... So you can now play on Easy or Hard and experience the game differently but it may not be quite where it needs to be yet, since all non-normal difficulties have been untested for a while.

This means that if you do play with this latest patch applied, please let me know how the non-normal difficulties feel to you. Is something too easy, too hard? If you're struggling, is it because of resources? Or fights? Anything helps!