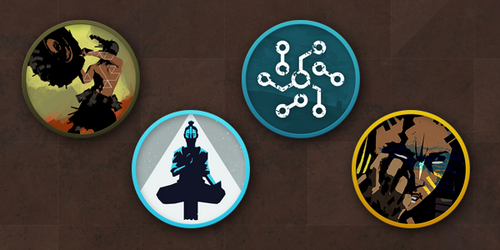 Another dev update! This one's about achievements, Steam integration and other things! I spent a lot of time in the last two weeks on some contract work (I too need to put food on the table, after all) so progress had slowed down a bit. But I'm back at full speed now, and I've added:

The game now features 27 brand new achievements. You can unlock those as you play and also see them in game under the new COLLECTIONS menu screen. The game will now track your progress and notify if you unlock a "cheevo" while you play. Here's a small sampling of the available achievements:

These achievements will soon be available in an update. The update is currently in the beta branch being tested and if everything's nice and stable it will make its way to all players on itch soon. But do note: There are some achievements (like "Complete the campaign") you may have technically already unlocked, but since the information required for them wasn't tracked and saved before the update, you will have to complete it again.

So, if you find some time to play with achievements and you have some feedback on their difficulty, do let me know! The numbers for many of the stat-based achievements are a first shot and may be finished too quickly or take too long. I may adjust them after some testing and feedback.

Both the daily challenge that was included in the last update and the achievements for the next are features that benefit greatly from a proper game service integration, like Steam offers for example. I've already put work into that so that these things are properly tracked and shown within the Steam framework.

But this stuff is fiddly and may have some issues. So before the game finally launches on Steam there will be a Steam Beta period. A limited contingent of Steam Keys will be available for itch First Access buyers interested in testing the game's Steam integration. I don't quite know the amount of keys or the timeline for this yet, but I just wanted to let you know in advance.

See you next week!