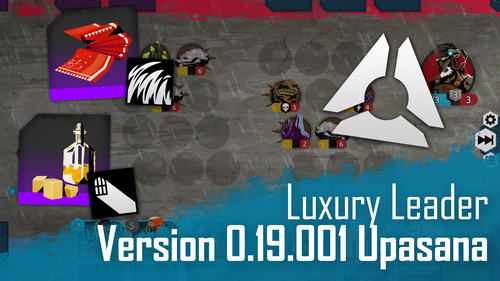 Upasana: Sitting in worship and reverence.  This is a significant update - big enough for a version number change and a new tag. So let's sit down and take a look:

0.19.001 features not one single big thing but lots of important changes and improvements, along with the usual host of smaller improvements. But these new features can be clearly felt all over the game! I've been talking about a few of them on the devlog, and will detail the reasons for more of them in the future. All in all, this was a big chunk of work, with lots of testing to make sure it plays well.

From where I stand this was the last piece of heavy lifting before the game is finally gold. Anything else coming now will mostly be balancing, polishing and tweaking as I start to ramp up for launch and the marketing work that comes with it. After about four years of development it's really time, if you ask me...

So what changed? Let's have a look at that infamous changelog, shall we?