The game is moving towards the goal at rapid speed. It's time to file off the last edges to make everything as good as it can be. And I need your help!

So recently I found myself thinking about the following issues, based on player feedback and my own observations:

So to solve these issues I've been building things and testing out a few changes in the beta branch. I'll be speaking about a different issue and my thoughts and changes over the next few days.

In game you can collect luxury items to share with your convoy. This is the primary way to regain and improve hope.

In the past, with a Hope maximum of 100, you'd wait until hope was down in it's 30s, then you'd stop, enter camp, go into your cargo and share enough stuff to get you as high as possible. Then you'd be on your merry way. That was fine for a long time but I've been starting to feel that it was too much like busy work. 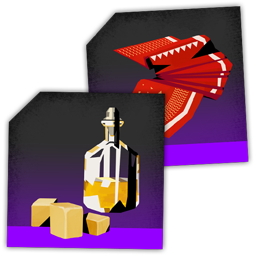 So I removed it. I raised the Hope maximum to 999 and simply auto-shared luxury items the moment the convoy got their grubby little hands on them. And that was fine, but something was missing. So it was time to get back to the reason for the Luxury items in the first place.

They had two goals:

Now the old version of the game didn't really meet these criteria. Generally you didn't sell hope items, because you never had enough hope. And since you'd end up sharing them en-masse, you didn't really do it deliberately.

The new version wasn't much better. Now hope items simply had no real gameplay value at all.

So what could I do?

One section of the game space that I had long thought about but never really put into the game was temporary benefits. Equipment grants benefits as long as it's equipped but there's no such thing as temporary consumables that improve the convoy. But there is the luxury items, that are the only type of consumable item. So... why not combine those two?

And that suddenly solved a lot of things and added a chunk of interesting complexity:

So, what buffs are there?

I looked at the items and split things into "aggressive" and "defensive" and then separated things by rarity. And then came up with the following buffs:

When you scrap a card: Gain hope equal to your Energy maximum. Once per fight.

What does it do? Well, it makes you want to scrap as late as possible. That means in the first rounds you'll try and go without, effectively putting yourself at a disadvantage to gain more hope. It also tempts you to have the fight run a bit longer than you normally would, with the risk of maybe taking some damage.

Also, incidentally - the fact that many of the buffs give out a varying amount of hope means you want to see the amount directly in the fight. Which meant I had to touch up the effect when you gain hope in combat, to display that number. And that it turn adds more detail to some loot obstacles.

I'm pretty happy with most of them, though I think RIGHTEOUS TENACITY is a bit boring. It triggers on something that happens anyway. Plus I'd love for the rare buffs to give a small in-combat benefits, so I'll probably change the rare set again. If anyone has some good ideas, I'd love to hear them :)

Also if you had a chance to play with them, any feedback is appreciated!