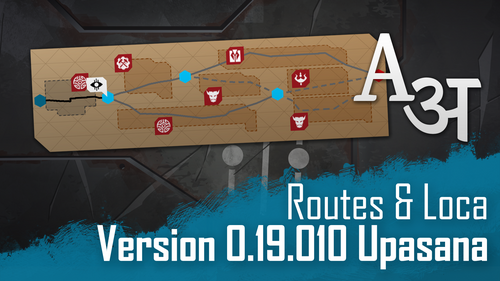 Warning: This update will break your save game!

The year is closing out and it's time to round off this game here. This update is filled with a bunch of changes, many small but let's talk about the more obvious and important ones:

So far the overall journey always followed the same shape: A decision between two routes at the end of each milestone. This didn't allow you to plan much across the entire trip. I've always wanted to address that issue, something I've finally gotten around to: The Route Selection screen was completely overhauled and there's now a few different shapes available. There's still the very straight one, but there's options where you can take more risky paths and skip milestones, for example.

This required a major change to the data structure underneath, which means all older save games will be incompatible with this update.

Large parts of the game are now available in French and German, and there's also an incomplete Spanish version. I've translated the German myself and very special thanks go out to Kevin aka kikivikikiwi for his work on the French.

So far everything has been translated except the card texts, buff texts and the events. These will come in a future update but until then there's a small note in the main menu if you're using an incomplete translation.

And if you're interested in helping with the translation, join the discord server and speak up in the #translation channel.

The next bigger change is the consistent addition of sound effects to the game. All buttons now consistently make sounds, there's sounds for back buttons, cards & followers now have a hover SFX etc. This is a small but very present change so I'd love everyone's feedback. I've known the game for so long it's very hard for me to judge if the sound is annoying or useful.

There's also a much more under-the-hood change in now. I've adjusted the way things trigger to fix some bugs (scrap armament etc.). However this relates to everything that triggers so some things might behave a tad different now. I've tested a lot but it is very possible that I've missed it - I'm only one person and the game's pretty complex, after all. So if you spot any weirdness in relation to any combat effects, please let me know!

Well, the next step is to migrate the game from Unity 5.4 to Unity 2018.2. This is a big change but needed to stay compatible with current devices. I've already started on it and it looks like it might even improve the game, but there's some fiddling and testing needed to make sure everything works as planned.

And there's enough work in all other areas of the game. Especially making it possible to translate the entirety of the game's text...

Small update: I've gotten some reports of errors in the new version. If you encounter anything, please send a screenshot or the log my way!